Is the Price of Bitcoin Satoshi Vision (BSV) Driven by Fake News?


The Bitcoin Satoshi Vision (BSV) price chart is peculiar to analyze. Given the state of cryptocurrency investment, it is safe to say that a large influencer of crypto value is derived from speculation, and BSV is plagued by speculation as its chain leader, Craig Wright, continues to claim that he is Satoshi Nakomoto—the anonymous original creator of Bitcoin.

Analyzing BSV over the last year, there were two major surges in price and they both appear to be driven by intriguing public announcements or as some in the community would adamantly say: fake news. 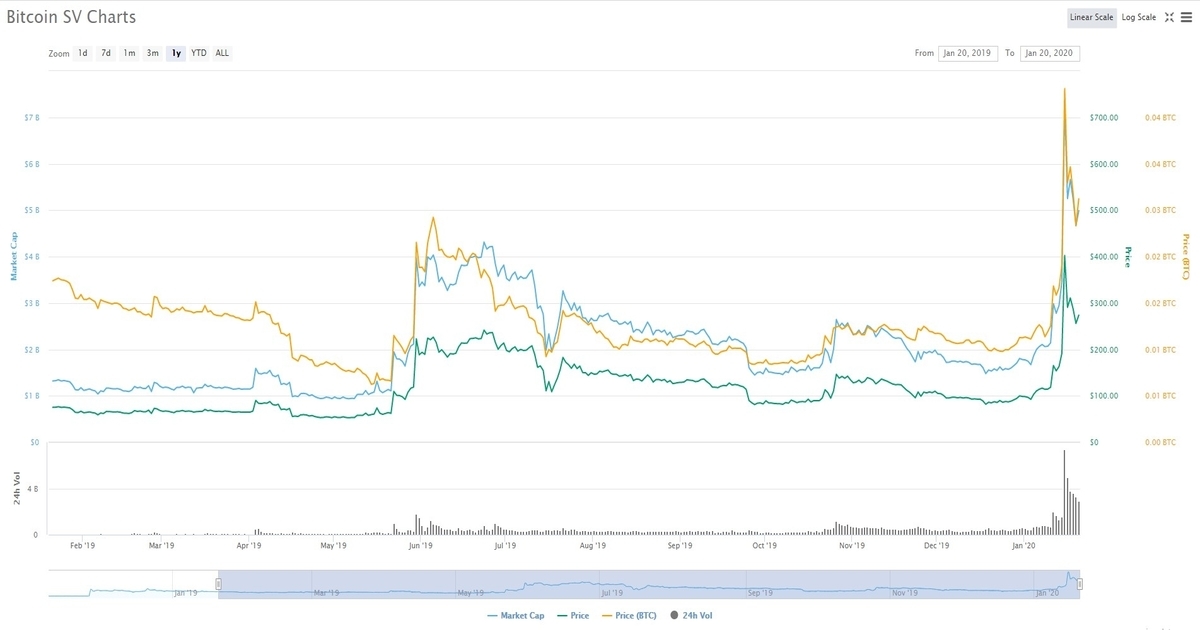 On May 21, 2019, news sites reported that Craig Wright had United States copyright registrations for the Bitcoin (BTC) white paper authored by Satoshi Nakomoto.

Upon hearing the news via CoinGeek that Wright had been granted copyright registrations for the original Bitcoin Whitepaper by the U.S. Copyright Office, I had had very mixed reactions. While I, and many others in the crypto space, would like to know the true identity of Nakomoto - it was difficult to picture Wright as the anonymous author of the whitepaper that kick-started it all. 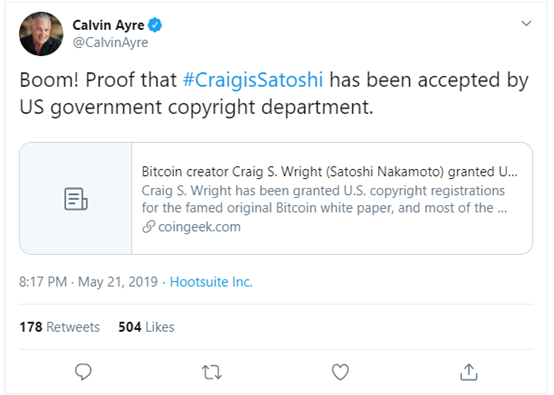 With many believing that the U.S copyright office had vindicated Wright and his claims, the price of BSV shot up from around $61 to nearly $230. The price would be short-lived, however, as the U.S. copyright office would go on to release a statement that emphasized that the agency, “does not investigate the truth of any statement made," and BSV slowly made its way back down throughout June and July.

As highlighted in an article from Bitcoin.com published on May 23rd,  anyone can apply for registration of anything at the copyright office and unless someone else makes the same claim it is unlikely there will be much contention.

As would be expected, an inventor of Bitcoin would have large holdings in BTC. Wright and his late partner David Kleiman had previously brought to light a draft of a contract that described the Tulip Trust which is estimated to hold around 1.1 million Bitcoin which is worth approximately 10 billion U.S dollars.  Following the death of David Kleiman, Wright revealed that the contract further outlined the Bitcoin held should be granted entirely to himself which has led to an ongoing battle with Ira Kleiman, David's brother.

On Jan 10th, 2020, Wright was issued a court order that compelled him to unlock the Tulip Trust. The order stipulated that he has until February 3rd to provide the keys to the Tulip Trust, with the public keys required via bonded courier before the end of January.

As reported by Blockchain.News, on Jan. 14 Wright seemed to instigate the second surge in BSV's price when he filed a notice of compliance with the court which stated, “Dr Wright notifies the court that a third party has provided the necessary information and key slice to unlock the encrypted file, and Dr.Wright has produced a list of his bitcoin holdings, as ordered by the Magistrate Judge, to plaintiffs today.

Following the filing of compliance, the price of BSV surged up to a high of $459 and lead to BSV being the 4th highest ranked cryptocurrency in terms of market cap, surpassing Bitcoin Cash.

As the key slice itself has not been produced, Wright's announcement of the court filing is being viewed by many as an attempt by Wright to further manipulate the price with sensational news. As Wright was a trailblazer for the Bitcoin Cash fork, many in the community are still suspicious and believe he is instigating an exit scam and has driven the price up through speculation.

While the technology behind BSV is not technically bad or uncompetitive with other cryptocurrencies, it is clear the milestones of BSV price are mainly driven by deliberately sensationalized and perhaps misleading news. Other sources have also cited wash-trading as the main contributor to the increased price.

One thing is clear, is that Wright's reputation has been suffering as he continues to make sensational headlines. Major exchanges like Binance and Kraken have already delisted BSV coin. Wallets like Blockchain.com wallets have also ended their support for  BSV.

Perhaps the evidence that Wright is not Satoshi is in the Bitcoin creator's final message "It would have been nice to get this attention in any other context. WikiLeaks has kicked the hornet’s nest, and the swarm is headed towards us."

Satoshi clearly realized the power of the technology he was bestowing upon the world and he apparently wanted none of the praise and none of the scrutiny. Juxtaposed to the outlandish character of Craig Wright and his desperate need to be recognized, we feel confident that Wright is not Satoshi.