Bitcoin (BTC) price experienced another bumpy transaction date, leading the price of BTC to drop to the lows of $42k and gained some momentum back at $45,181 at the time of writing, according to CoinMarketCap.

However, Bitcoin long-term investors considered this steep plunge as the perfect opportunity for assets accumulation, as alluded by Market analyst William Clemente III. He explained:

“Long-Term Bitcoin Holders are accumulating again after trimming their positions throughout the early bull run.” 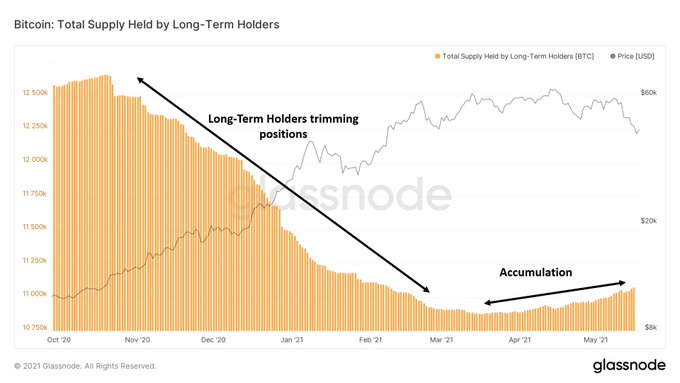 Clemente’s sentiments echoed by Glassnode co-founders Yann & Jan, saying that many people invest in BTC for the long run.

Furthermore, on-chain metrics provider Santiment believed that BTC is hitting the highest level of the positive sentiment of the year based on the current dip as many traders view lows of $40k as a perfect opportunity to buy.

Most of the on-chain volume came from short-term holders

According to on-chain analyst under the pseudonym Dilution-proof:

“Most of the on-chain volume came from short-term holders that ended up capitulating at a loss. Meanwhile, long-term holders & miners are stacking sats at an increasing pace, clearly buying the dip.”

The analyst alluded to the fact that long-term holders are buying the deep.

Market analyst Holger Zschaepitz noted that Bitcoin’s price has dipped to lows compared to gold since February. He acknowledged:

“The ratio of Bitcoin’s price relative to gold is down to lowest since Feb, BBG has calculated citing greater caution about speculative assets & the economic recovery from the pandemic. One Bitcoin is now equivalent to around23 ounces of bullion, down from a record of 36 ounces in April.” 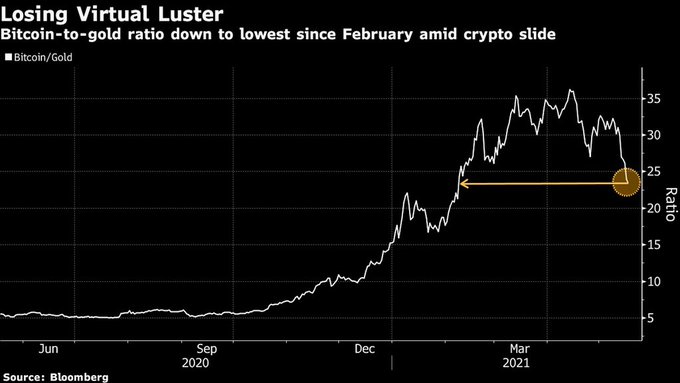 Despite the current struggles that Bitcoin was experiencing, SkyBridge Capital Founder Anthony Scaramucci recently stated it is still the cryptocurrency to own.

Bitcoin Miners Are Not Selling But Accumulating Their Crypto Funds