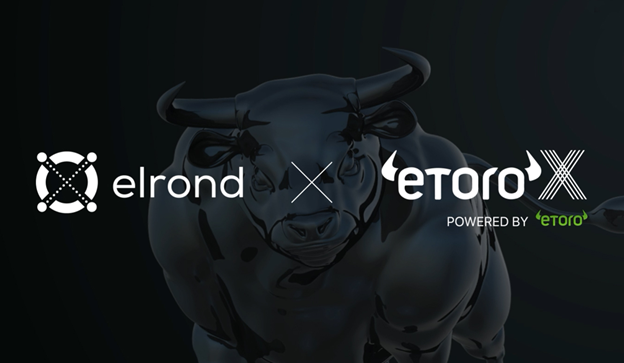 eToro’s will list Elrond’s native cryptocurrency eGLD on its cryptocurrency exchange, eToroX. eToroX is one of the largest regulated and licensed crypto exchanges in the market, and the listing of eGLD will make the token available to trade against more than fifteen cryptocurrencies.

Elrond set out in 2017 to develop a blockchain capable of 1000x throughput than most existing blockchain. Their goal is to build an internet-scale blockchain that can handle even the aggressive wave of mainstream adoption. The integration of eGLD with eToro ecosystem will help Elrond move closer to offering an integrated payment system to the global economy.

Elrond’s eGLD token will go live on eToroX on Dec. 23 2020. Listing on eToroX will create volume and integration of Elrond’s eGLD token. The Gibraltar-based firm describes its listing as a milestone in its efforts to build its token economy whilst boosting Elrond’s footprint in the marketplace.

“The support of a global community is important as Elrond’s ecosystem works toward addressing the scalability concerns of crypto space. Our pursuit of widespread adoption will take a big step with the listing of eGLD token on one of the industry’s biggest exchanges.”

The Elrond Network is planning to introduce its wallet and payment app, Maiar, which is scheduled to go live on Jan. 21, 2021. Somewhat similar to PayPal, and Venmo, Maiar will offer some clear benefits over these centralized platforms.

With eGLD token’s listing on eToroX and the launch of Maiar by the end of January next year, Elrond is moving closer to the global acceptance of its platform.

This is a sponsored press release the views and opinions expressed in this article are those of the contributor and Blockchain.News does not endorse and is not responsible or liable for any content, accuracy, quality, advertising, products or other materials on this page. Readers should conduct their own research before taking any actions related to this company.