Brock Pierce Served for Securities Fraud in Connection with His Blockchain Company Block.one During Electoral Campaign


Presidential hopeful Brock Pierce was served a court summons during his presidential campaign in front of his new headquarters in New York City today. US attorney James Koutoulas uploaded a video of when the class action caught Pierce by surprise. 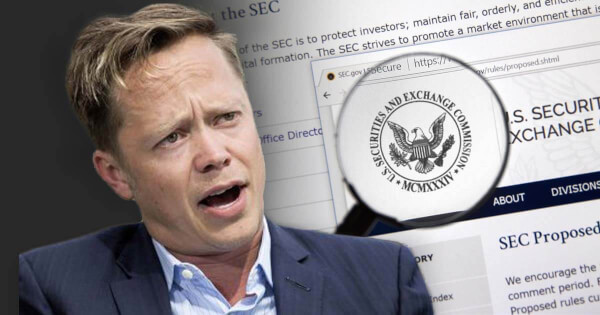 During a presidential campaign run that marked the opening of his New York City headquarters, Block.one co-founder Pierce was served by James Koutoulas’ legal team with a class-action lawsuit against the blockchain company. Koutoulas, the CEO of Typhon Capital Management and the lead attorney in the legal case against Pierce and his colleagues, uploaded a video of the exact moment the Block.one co-founder was hit with the suit at the presidential rally. He tweeted:

“Our team served Brock Pierce for securities fraud at his rally in NYC. Pro tip – when you’re trying to avoid getting served for a multi B fraud case, maybe lay off outlandish presidential campaigns.”

Brock Pierce, a venture capitalist entrepreneur that had helped co-found a number of blockchain and crypto projects, such as Tether, Block.one, and Blockchain Capital was caught off-guard during his presidential rally. He was charged due to a securities fraud class action suit directed against his company, Block.one.

Back in September 2019, the US Securities and Exchange Commission (SEC) had slapped a $24 million fine at blockchain company Block.one for conducting an unregistered initial coin offering (ICO) hosting EOS digital tokens in 2019. The ICO was estimated to be worth $4 billion. The blockchain company had agreed to settle the charges and pay the civil penalty, following the SEC's sanctions.

However, the US Securities and Exchange Commission hit Pierce along with his other co-founders Daniel Larimer, Brendan Blumer, and Ian Grigg a second time with a class action complaint in relation to violations of the Federal Securities Law this May. The official legal notice served during Pierce’s presidential rally was filed on behalf of all investors that had bought EOS tokens or received them from June 2017 to the time of writing. It read:

“This action is brought on behalf of all investors who purchased securities issued by Block.one called ‘EOS Tokens’ (the ‘EOS Securities’) during the period of June 26, 2017, to the present (the ‘Class Period’).”

Led by Crypto Assets Opportunity Fund LLC, Johnny Hong in May, and brought upon by Koutoulas’ legal team recently, the document stipulated:

“This case arises out of a fraudulent scheme, fueled by a global frenzy over cryptocurrencies and unchecked human greed, to raise billions of dollars through sales of a cryptocurrency called EOS – an unregistered security – to investors in violation of the United States federal securities laws.”

Brock Pierce –what his candidacy means for tech and crypto

This comes at a crucial moment for the Tether co-founder. Brock Pierce had announced his plans to join the presidential race on a last-minute notice on July 5. Known to be a blockchain pioneer, a venture capitalist entrepreneur, and a firm crypto and technology advocate, Pierce’s plans to join the presidential run may mean significant things for the industry. With a proven track record for building businesses from the ground up, Pierce had previously publicly disclosed:

"I've spent my life creating great things from nothing and I can help others do the same. Entrepreneurs are essential to the rebuilding of this nation that we love, and I'm running in this race because I know that together we can help build a pathway towards the rebirth of the America we love so much."

On top of his active involvement in the tech industry, Pierce had also been known for creating Tether, the first stablecoin that is backed one-to-one with USD.

However, in July, the New York Supreme Court had found that Tether stablecoin empire, along with coin exchange Bitfinex were alleged to have colluded in concealing the loss of corporate and client funds estimated to be over $850 million worth. In the federal court’s ruling, Brock Pierce was not mentioned.

However, in light of the crypto venture capitalist being served during his presidential rally earlier today, Brock Pierce’s name will most likely go through public scrutiny and criticism, as the presidential election is looming close. The US elections are currently set for November 3, 2020.