A New World of Money - Blockchain in Human History Series 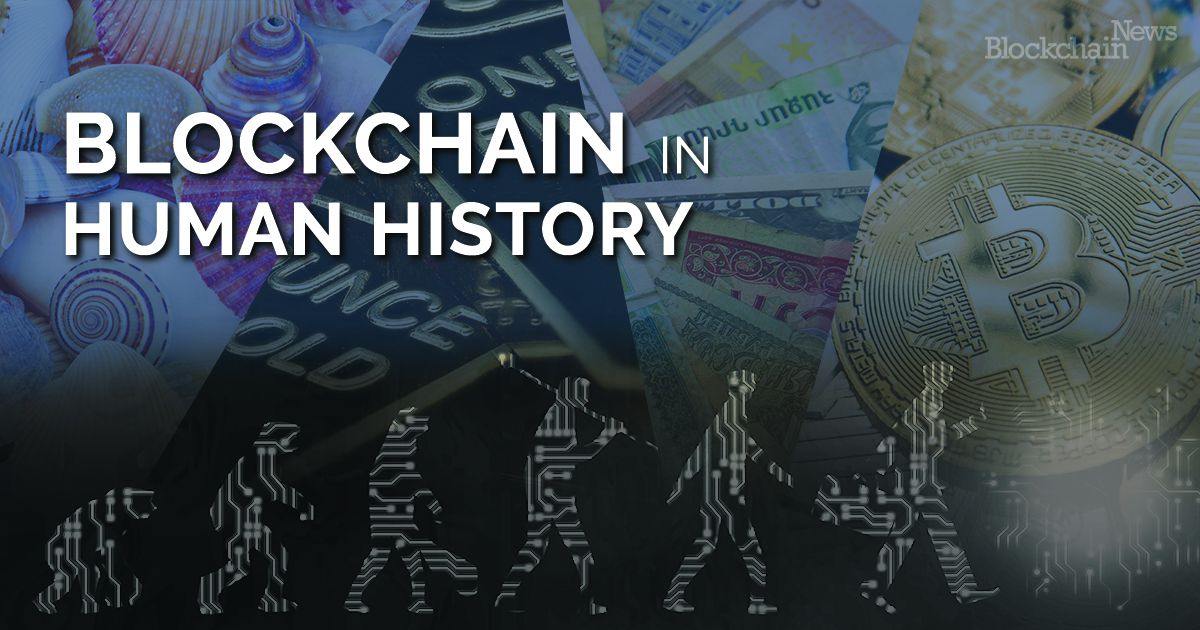 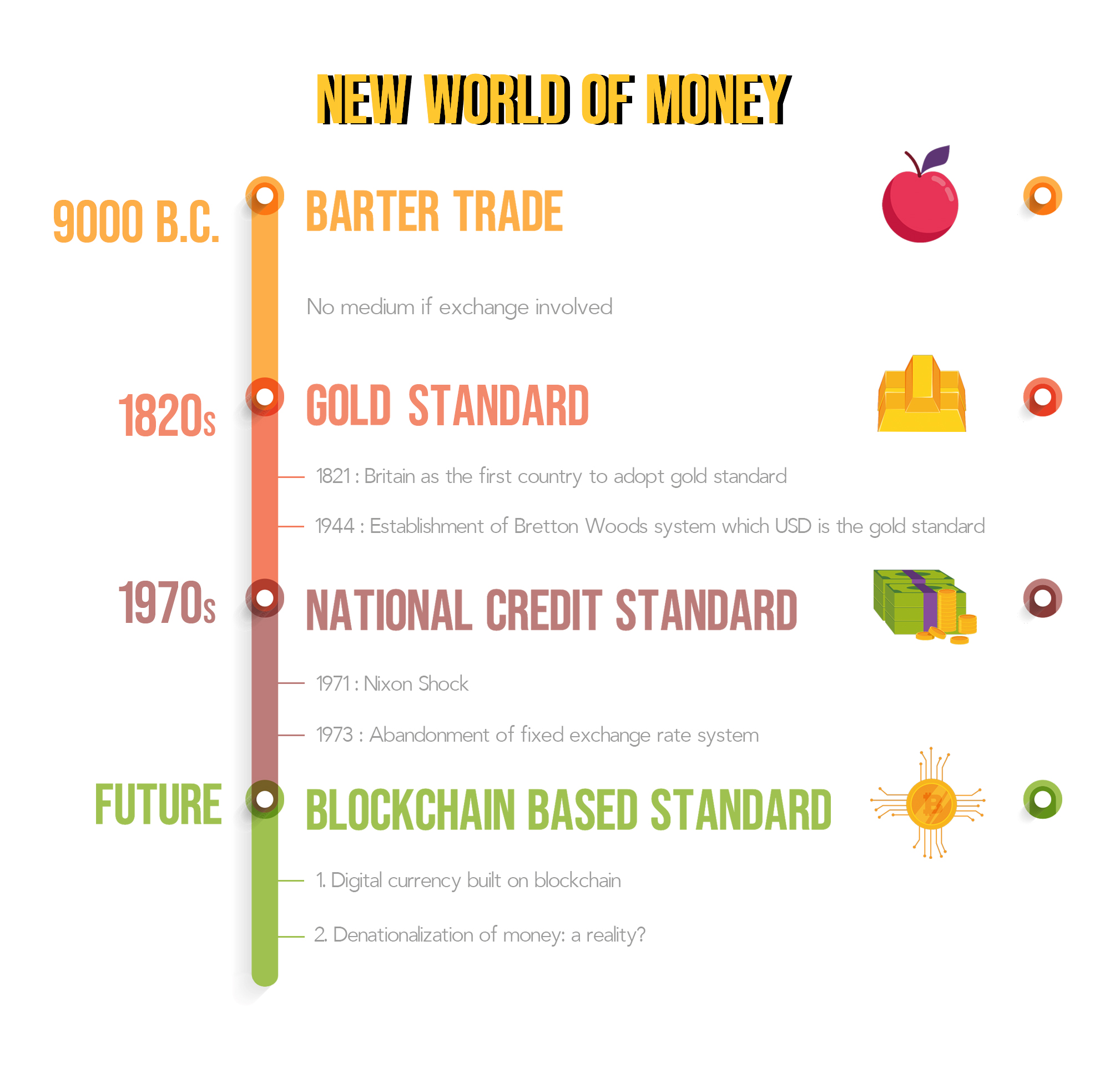 Barter trading involves the trade of physical commodities. It was first recorded in Egypt in 9000 B.C. which farmers used grain, wheat and cattle to barter other goods and services. There was no medium of exchange involved in the barter trade. The concept of commodity money emerged in 3000 B.C., which the Mesopotamians used shekel, a specific weight of barley grain to develop a large-scale economy.

Prior to the emergence of coins as money, money was in forms of other physical objects. In 1200 B.C., cowrie shells were used as a medium of exchange across coastal regions across the Indian Ocean. In 1000 B.C., China used metallic cowries using bronze and copper as money. Coins first appeared in 500 B.C. in Lydia (in Turkey) which were made using a mixture of gold and silver. Due to the bulkiness of coins as medium of exchange, paper money was first introduced in the Song dynasty in China. Macro polo’s travels to Eastern Asia have brought the idea of paper currency back to the Europeans. Sweden has issued the first banknote in Europe in 1661 and other countries started to follow. However, as there was a lack of regulation in the printing of paper money, the face value of banknotes was determined by the reputation of the issuer and many banknotes became almost meaningless.

The limitations of banknotes led to the establishment of gold standard by countries. Gold standard is the monetary system which the country’s currency is pegged to physical gold. In 1816, Britain recognized gold as the official standard of value and they minted one pound gold coin named the Sovereign. In 1821, Britain became the first country to formally adopt a gold standard.

In 1867, the first International Monetary Conference was held in Paris. Félix Esquirou de Parieu, the French statesman who originated the Latin Monetary Union, proposed a single gold standard and decimalization of currencies and were approved by principal countries of the conference.  The America enacted the Gold Standard Act in 1900, which led to the establishment of central bank. During the Great Depression in 1930s, both Britain and the America abolished the gold standard in 1931 and 1933.

Gold standard was once again adopted by nations following the Bretton Woods Agreement signed in 1944. Delegates from 44 countries attended the United Nations Monetary and Financial Conference in Bretton Woods. The Bretton Woods Agreement led to the establishment of the International Monetary Fund and the World Bank. Moreover, it was agreed that the value of other currencies was pegged to the value of USD, which is indirectly pegged to the price of gold at $35 per ounce.

The Bretton Wood System became fully functional in 1958 which countries settled their international balances in USD which could be fully convertible to gold. The U.S. government was responsible to adjust the USD supply and maintain the conversion rate between USD and gold. The Bretton Wood system collapsed in the early 1970s.

The drawbacks of Bretton Wood system surfaced in 1960s, which the USD was in surplus due to the increase on federal spending such as foreign aid, military expenditures, foreign investments and domestic programs. The USD became overvalued as a result which could undermine the foreign trading position of the United States.

Spoken on 15 Aug 1971, U.S. President Richard Nixon believed “The time has come for a new economic policy, targeting unemployment, inflation and international speculation.” He then directed Secretary Connally to abolish the conversion of gold and USD in the interests of monetary stability, which led to the collapse of the Bretton Woods system. This is referred as the ‘Nixon Shock’. In response to Nixon Shock, the Group of Ten (G-10) set up the Smithsonian Agreement, a temporary agreement to set the new exchange rate based on the devalued USD, which was proven unsuccessful at the end.

Following the collapse of Bretton Woods system, the U.S. struck the deal with Saudi Arabia which oil prices were standardized in USD terms and oil revenues are denominated in USD. The USD became the “petrodollar” and the purchasing power of petrodollar relied on the U.S. core inflation rate and the value of USD. The petrodollar elevated USD as the world’s reserve currency. The 2016 Triennial Central Bank Survey by the Bank for International Settlements (BIS) revealed that USD remains the dominant currency as 88% foreign exchange deals involved USD. The monetary policy by U.S. federal reserve plays an important role in determining today’s monetary system.

With the advent of blockchain technology, we can foresee the vision set by Nobel-prize winner Friedrich A. Hayek: Denationalization of Money, can become a reality in future. If denationalization of money is said to be a reality, we can expect that blockchain will be the basis of issuance for corporations or individuals launching their own currencies. Here are some of the observations why blockchain can be the next money issuance standard:

a) Stability of Fiat Currencies given Macroeconomic Turmoil

With the ongoing trade war between China and the U.S., the UBS predicts that the GDP growth of the US will slip to 1.8% in Q4 2019 and 0.3% of Q2 2020. The trade war adds further uncertainty to US businesses as Donald Trump lifted up import tariffs of Chinese goods by 5%, which in turn US businesses will pass on the higher costs to consumers.

The recent macroeconomic turmoil led us to rethink the stability of existing fiat currencies. For instance:

i) The collapse of Argentine Peso following the defeat of Marci’s presidential election, which the Argentinian stock market plummets by almost 14%;

ii) The ongoing depreciation of Chinese Yuan against USD

As the trade war escalates, Chinese Yuan dropped below 7 to USD in Aug 2019, the first time since Feb 2008. Donald Trump claimed China as the “currency manipulator”, which China was accused of breaking the promise in the G20 summit of staying away from competitive devaluation;

iii)  Surging volatility of British Pounds (GBP) with Brexit fiasco
If a “hard Brexit” is set to happen, it may costs the U.K. of GBP $190B in economic fallout by 2030;

iv)Debt crisis in Italy
Italy owes 2.3T in public debt, which amounts to 133% of its GDP.

The instability of fiat currencies declines public trust in governments. As a result, they are starting to explore cryptocurrencies as an alternative as medium of exchange and storage of value.

We can foresee that central banks accelerate their plans to launch their CBDC especially following the announcement of Facebook’s Libra. People’s Bank of China, for example, proposed a Chinese CBDC backed 1:1 by fiat reserves (M0 supply). This CBDC will be based on a two-tier system for issuance and redemptions, with manageable anonymity and encryption features. It is noteworthy that CBDC is mostly built on permissioned instead of public blockchains.

c) Own digital currency by corporations and individuals

e) The Future of Financial Infrastructure

We believe the use of blockchain will streamline financial services industry and revolutionize the existing financial structure. The payment and settlement process of digital currencies are streamlined using blockchain without intermediaries involved.

Apart from real time settlement and removal of counterparty risks, compliance processes are standardized in payments and trade finance using blockchain. In future, we can foresee a distributed financial infrastructure by blockchain, in convergence with other technologies such as artificial intelligence and internet of things (IoT).

In future, whether denationalization of money becomes a reality remains to be seen. However, it is evident that blockchain-based currency will be the new money issuance standard and we will witness a new world of money!