18,000 Bitcoin Whales Circle the Crypto Market, Each Holding At Least $1 Million in Bitcoin

According to recent data released by Glassnode analytics provider, the number of Bitcoin millionaires has surged by 38%, which means there are now around 18,000 Bitcoin whales. 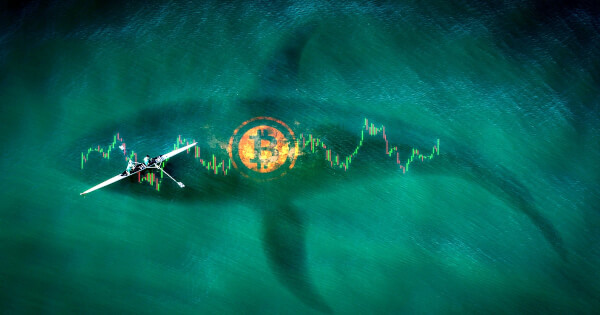 Glassnode analytics provider recorded a spike of 38% in crypto wallets holding at least $1 million worth of Bitcoin, which indicates that there are now at least 18,000 Bitcoin Whale addresses. Glassnode also has announced that miners have been actively getting rid of their Bitcoins.

Glassnode recently tweeted that the recent increase in the volume of Bitcoins on cryptocurrency exchanges shows that Bitcoin whales have been actively increasing the amount of Bitcoin they are holding.

Investors have been snatching up Bitcoin as it surged over the crucial $10,000 resistance level, surpassed $11,000 moments before a minor correction. At press time, the price of Bitcoin is sitting around $11,014, according to figures from CoinMarketCap.

However, with a sudden increase of BTC available on cryptocurrency exchanges for liquidation, the Bitcoin price looks vulnerable for a price drop. Such spikes in miner outflow have preceded Bitcoin price drops in the past, but they do not necessarily mean a drop in that way.

A closer look at the chart shows increased consolidation among large owners. But this indicates a potentially troubling trend among the anonymous accounts. Bitcoin addresses are basically anonymous.

The increasing ownership concentration implies that the sway that big holders have over prices is likely increasing. The problem with a few big players holding cryptocurrency is that when they sell, they can easily push the price down, and this makes the market susceptible to rapid swings.

Bitcoin remains volatile as there are relatively few big wallets holding most of the cryptocurrency. There is speculation that some of the whale accounts are custodians and exchanges, holding coins for several clients. Exchange marketplaces are not typically audited and regulated as strictly as legacy financial institutions which has created the potential for market manipulation.