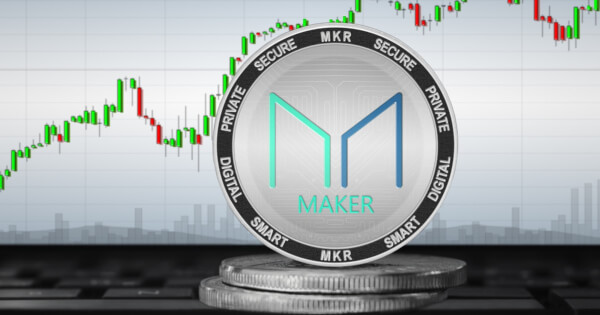 Maker provides the first decentralized basic stable currency Dai (which can be compared and analyzed as the U.S. dollar on Ethereum) and a derivative financial system, promoting the prosperity of decentralized finance (DeFi).

Dai is issued through a full mortgage guarantee of digital assets. Since its launch in 2017, Dai has always remained anchored to the U.S. dollar with a 1:1 ratio.

On April 19, members of the MakerDAO community began to vote on MIP45, a proposal aimed at upgrading the liquidation system of the Maker protocol and maintaining the stability of Dai pegged to the U.S. dollar.

If approved, the liquidation 2.0 system will provide higher security, predictability, and decentralization, and provide community members with more opportunities to participate in collateral auctions through Auction Keeper software and a more conventional interface. This will promote the participation of the Maker community and the entire DeFi department.

According to data from DeFi Pulse, Maker, the largest DeFi agreement with system collateral of $965 million, dominates 16.44% of the entire DeFi market.

The holders of the Maker (MKR) tokens of the project have received a 64.23% price increase reward in the past week. According to CoinMarketCap, Maker with a market cap of $4,817,105,553, ranks as the 30th largest cryptocurrency. 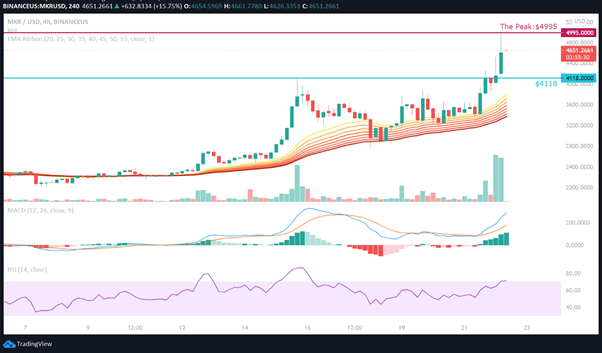 Judging from the 4-hour candlestick chart, MKR has successfully broken through its previous high of $4,118, and the rapidly expanding trading volume has resulted in $4,118 being flipped from a resistance to a support level.

The transaction price of MKR/USD is higher than the Exponential Moving Average (EMA) ribbon. Both the upward moving average and the bullish MACD index indicate that the bulls are currently dominating the market.

However, the Relative Strength Index stepping into the overbought zone is gradually levelling off, which suggests that MKR is encountering relatively strong selling pressure after touching its all-time high of $4,995 today. The MKR's price will therefore experience a slight retracement, and it is likely to trade sideways for a period of time around $4,400-$4,600 before resuming its upward momentum.

If MKR's price can stabilize above $4,200, then the upward trend of Maker may open a faster upward channel. As Maker hit a new high, this will mean that the altcoin will not encounter strong selling pressure on its way up. If the entire crypto market emerges from its current slump, it is highly likely that Maker breaks through $5,500 in the short term.

Conversely, a surge in the number of sell orders will push MKR below the $4118 support level and may trigger a more severe correction to the 20-day Exponential Moving Average of $3,795.